So you want to boost your weightlifting prowess? You’ve looked into straps and belts, what else could you possibly add to help you lift more?

If you’re looking at your feet now, then you got that right.

Did you know that the wrong pair of footwear could totally set you back?

Let’s put it this way-when you pull a bar bearing weights twice your weight, the more force you can generate from the ground means you can pull the bar higher. Once you are under the bar, you transmit the force you are generating from the ground to push the weight when you squat.

You can’t wear any old pair of sneakers for that.

While your shoes right now might be great for running, they have a lot more cushioning going on to absorb the impact for precisely that.

Remember the force you are generating from the ground when you pull your barbell and squat with it? Your running shoes will absorb all that force and significantly decrease your performance in weightlifting.

Footwear like the Nike Romaleos 2 weightlifting shoes. Nike might have made a name for themselves making some of the greatest running shoes out there but the Romaleos 2 is nothing to scoff at when it comes to weightlifting either.

Ready to lift and squat your way to heavier weights? Read on to find how the Nike Romaleos 2 weightlifting shoes could help you achieve that goal. 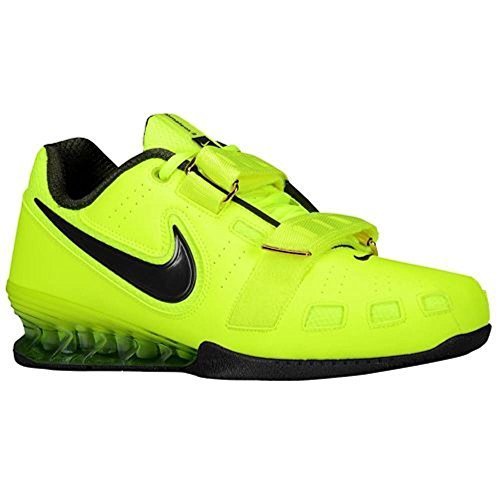 Check Price and Rating on Amazon.com

Okay, the truth is these shoes weren’t all that when they first came out.

Sure, they certainly earned a name for themselves as one of the best weightlifting shoes when they came out in 2008.

However, they were so stiff and chunky and expensive that they eventually faded into obscurity after the 2008 Beijing Games. What can you say? The name Romaleos apparently meant “strong” or “robust”.

Just not in a good way.

Fast forward to 2012 and Nike certainly put in a lot of extra effort to take care of the issues plaguing what was once a very popular weightlifting shoes. If there ever was a rigorous diet for footwear, the descendants of the original Romaleos must have gone through it as they managed to shave off a whopping 20% or approximately 50 grams off of each shoe.

Although the second-generation Romaleos looked a lot like the first generation, it seems that that is just about where the similarities ended!

Aside from the reduction in weight, the people over at Nike worked over the shoe internally to address its stiffness as well. The Romaleos 2 is made of a synthetic leather that has the right amount of suppleness but does not take a long time to break in, which is the problem with most leather equipment such as belts and straps. It is not that flexible but it certainly has become a lot more pliable than the first-generation Romaleos!

These are still more expensive than a pair of Chuck Taylors but they have certainly regained their tarnished reputation, putting Nike back up there with Adidas as one of the world’s leading manufacturers of weightlifting shoes.

Let’s dissect the shoe further to break down the pros and cons of what makes the Nike Romaleos 2 popular in the weightlifting world.

Okay, so the good news first.

The Nike Romaleos 2 weightlifting shoes are crafted from synthetic leather that although makes them more pliable than their predecessors, are still not as flexible as the competition. However, compared to other leather weightlifting products, it is easier to break in.

Nike has also disposed of the more traditional wooden heel for weightlifting shoes, crafting one made of thermoplastic urethane or TPU instead, just like other high-end shoes in its category. The heel was also contoured to support the foot in a full heel cup, aptly named by the company as the “Power Bridge”.

These have got to be one of the most accommodating weightlifting shoes in the market. The Romaleos 2 is listed as a D but there have been no complaints from those with wider feet.

The shoes also come with two insoles-a softer “training” insole and a stiffer “competition” one. The Competition insole is also noted to be heavier and more contoured than its Training counterpart.

Although there are those who might find the shoe a bit stiff already and prefer to use the Training insoles, there are also those who feel that the heavier Competition insoles make for a better fit.

In any case, giving your consumers a choice-any choice-is always a big plus.

The Romaleos 2 continue to live up to their moniker, which means “robust”.

They are certainly a bit bulkier looking than the other shoes in the same category, which gives it a stronger and more stable vibe.

Nike also offers several color choices for the Romaleos 2 instead of just giving you one shoe that looks like all the rest. Again, consumers love being given a choice.

Also, there are these little touches on the inner side of the midsole. The left has an inscription that reads “Go forth and…” and the right says “Dominate”.

While there are some who would say that the Romaleos 2 continue to live up to their name, which means “robust”, there are also some who might find these weightlifting shoes a bit too bulky for their tastes. This means that this pair is a bit uncomfortable to walk around with.

If you do nothing else but lift weights, then this may not pose much of a problem. However, if you require some degree of mobility then you might want to go for a lighter pair.

The second generation might have gotten rid of a fifth of the weight of the original Romaleos but these are still the heaviest weightlifting shoes so far.

If you have a preference for shoes that feel like second skin, then sorry, but the Romaleos 2 might disappoint you in that area.

The Nike Romaleos 2 shoes are made of synthetic leather and we all know how leather takes some time to break in. Although breaking in for these shoes are reasonable, there is still some stiffness to be expected. Some even say it is almost like walking in ski boots instead of shoes!

The Nike Romaleos 2 have two metatarsal straps, each one with a metal cuff at the end to prevent fraying. One of the straps is located at the top of the tongue of the shoe while the other one is located further down near the back of the toes.

While these straps work well to ensure a snug fit, it might have been better to have just used one strap, really. The one at the bottom really made no difference whether you strapped them on or not.

Another issue with the straps on the top is that they are too long and tend to drag on the ground.

If Nike could do away with the bottom strap and trim off the excess on the top one, these straps would be golden.

If you could look beyond the stiffness and weight of the Romaleos 2, then the price is pretty much its greatest drawback.

Other top-tier weightlifting shoes might be somewhere within the same price range but if you’re new to weightlifting or a bit low on cash, then you might as well kiss the Romaleos 2 farewell as they certainly do not come cheap.

When talking about the best weightlifting shoes, it always boils down to Nike vs. Adidas. While Adidas has dominated the weightlifting category in footwear, Nike certainly does not disappoint despite being a newcomer in the arena.

The Nike Romaleos 2 weightlifting shoes are certainly worthy of the attention it has received in the weightlifting world. While they are certainly at the higher end of the spectrum on price, the build and quality of the shoes more than compensate for it.

These shoes are a strong, quality pair that can help you generate more force from the ground and transmit it to your weightlifting. Not only that, but they are made of quality materials and fit great even for those with wider feet.

When it comes to giving consumers choices, Nike certainly gives you a lot of options from color combinations down to the two insoles that come with the shoes, whether you want a more pliant feel or a stiffer one.

Would I recommend these shoes for weightlifters?

Well, if you have the budget for it and prefer a strong, quality pair of shoes for your weightlifting with only a small degree of mobility necessary, then the Nike Romaleos 2 should definitely be on your list of choices.

Really, ditch your running shoes and get yourself a decent pair of weightlifting shoes.

8 Best Training Shoes for Women In 2020
How To Front Squat Properly: An Ultimate Instruction
The Weight of an EZ Curl Bar and Other Questions – All Answered!

FitnessCurrent.com participates in the Amazon Affiliates program – if you make a purchase after clicking a link from FitnessCurrent.com to Amazon.com, we will receive a small percentage of the sale at no extra cost to you. Thank you for your continued support!